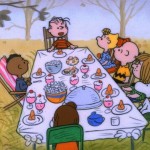 I have mixed feelings about Thanksgiving itself, but I'm such a fan of the Peanuts series and comic strips ever since I was a child.  I still remember my daddy reading me the Peanuts comic strip from the Sunday Washington Post as a child.  Charles Schultz was a genius! Ahhhhh!  The memories. Enjoy! The below version has the old school commercials in it … END_OF_DOCUMENT_TOKEN_TO_BE_REPLACED

Even I don't believe that for a second.  Why would Audrina think that someone wants or would hook up with the guy she wants but doesn't ever really act like he wants her back? Audrina, I don't know you but something has totally rocked your self esteem. I have a girl power song list for you, hon, just dial me up.  For realzz. Justin Bobby is all about games so him not answering … END_OF_DOCUMENT_TOKEN_TO_BE_REPLACED

Please tell me this is some publicity stunt like when Dennis Rodman said he was getting married and showed up in a wedding dress.  It's like the arrangement that Bill Clinton and Hillary must have after their personal life was strewn all over the media for months.  Maybe there's some financial incentive to make this move. Talk to me people!  What do you think about the Speidi … END_OF_DOCUMENT_TOKEN_TO_BE_REPLACED

Yes, even MTV is on the Obama bandwagon.  I would totally love to attend this one.  Not sure how you go about getting tix. MTV to host inaugural ball in Washington for Obama Nov 25 06:51 PM US/Eastern NEW YORK (AP) - MTV is throwing an inaugural ball for President-elect Barack Obama.The network announced Tuesday that it will host the "Be the Change Inaugural Ball" at the … END_OF_DOCUMENT_TOKEN_TO_BE_REPLACED

I'm not going to say a word but simply share the info. Nov 21 03:19 PM US/Eastern By The Associated Press The name Brooklyn has been done before, so Ashlee Simpson-Wentz and Pete Wentz turned to another New York City borough in naming their newborn son: The Bronx.She hails from Texas, he grew up near Chicago, and the pop-rock power couple haven't said whether the Yankees' … END_OF_DOCUMENT_TOKEN_TO_BE_REPLACED