You are here: Home / Archives for Indepdent Television Festival 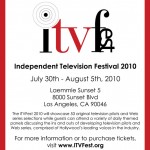 Official website- ITVFest.org Facebook Fan Page- www.facebook.com/ITVFest Now in its fifth year, the Independent Television Festival (aka "ITVFest") returns to LA from July 30, 2010 to August 5, 2010 at Laemmie Sunset 5 on 8000 Sunset Blvd.  The festival kicks off with a Red Carpet Gala on Thursday, July 29 which I have the pleasure of covering, so stayed tuned for more posts … END_OF_DOCUMENT_TOKEN_TO_BE_REPLACED