You are here: Home / Archives for dirty house 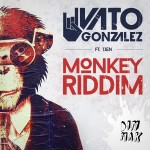 Dutch DJ and Producer Vato Gonzalez, one of the pioneers of the dirty house movement, released his latest "riddim" themed track called "Monkey Riddim" featuring Tjen on July 22. The track was released on Dim Mak Records. It's available for download on Beatport and iTunes, but you can take a listen first by checking it out below. What do you think? If you're fiending more … END_OF_DOCUMENT_TOKEN_TO_BE_REPLACED