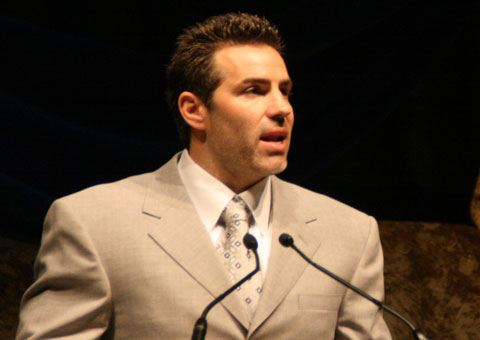 NEW YORK – January 25, 2012 – On the heels of an unprecedented sixth straight win as the #1 cable destination, and fulfilling its promise to kickstart its entry into the world of reality programming, USA Network announced today the pickup of the original reality series “The Moment” (working title). The 9-episode series, set to premiere third quarter, will be executive produced by Charlie Ebersol and Justin Hochberg and hosted by NFL Star and Super Bowl MVP Kurt Warner. The announcement was made today by USA Co-Presidents Chris McCumber and Jeff Wachtel.

Warner famously went from bagging groceries to being named Super Bowl MVP in just 18 months. In “The Moment,” Warner takes men and women on a life-changing journey by giving them a second chance at reclaiming the career dreams that they put on hold when their lives took an unexpected turn.

“We’re thrilled to be working with Charlie, Justin and Kurt on such an aspirational project,” said Wachtel and McCumber. “From the first moments of their pitch, we knew they were onto something that wasn’t just the right creative fit for the brand, but was also a fresh take on personal and inspirational storytelling.”

“Everyone has a ‘what-if’ moment in their life — a decision or path they could have taken – but rarely do they get a second chance to explore what could have been,” said Justin Hochberg and Charlie Ebersol, Co-Founders, The Hochberg Ebersol Company. “We created a format that taps into this emotion, and proved so powerful that it attracted Kurt Warner – the guy who got his own second chance – to his first reality hosting gig. USA is the ideal network for this innovative brand of reality entertainment.”

Each week, someone will be secretly nominated by a loved one and surprised by our host with an unbelievable offer: the opportunity to pick up where they left off and pursue the career they’ve always wanted. From race car driving to orchestra conducting to deep sea diving, they will leave behind the comforts of home and leap into a whirlwind of training under the expert guidance of a world-class mentor who will help them prepare for the audition of a lifetime. But if they succeed, will they accept the job and change their and their family’s life forever – or will they realize that they’ve been living their dream life all along, and go back home to their loved ones?