You are here: Home / Archives for ugly betty season finale 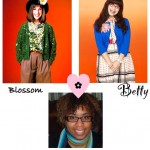 I thought I'd never get over the end of "Blossom" until "Ugly Betty" came to the rescue nearly 10 years later.  Where else will I turn to find the not black version of me? If I take an honest assessment, I could see the show's demise coming for a while.  In my opinion, it's not for a lackluster storyline.  Over the past few seasons, it's been kind of on again, off again … END_OF_DOCUMENT_TOKEN_TO_BE_REPLACED

I remember reading that Lindsay Lohan was supposed to make an appearance on the Ugly Betty season finale (which was okish by the way), but I didn't expect to take that so literally.  I mean the best thing they could come up with was putting her in some Ugly Betty flashback??  Lindsay, darling, you need to talk to your people because appearances like that pretty much solidify … END_OF_DOCUMENT_TOKEN_TO_BE_REPLACED