You are here: Home / Archives for Teddy 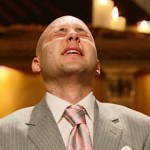 I didn't watch this season of Gs to Gents on MTV, but I happened to catch the finale.  It was nice to see Creepa and Shotta again and to know they're doing well.  That kills the press release rumor that circulated around at the end of last season stating Creepa was a fraud. Creepa and Shotta got to choose 1 of the final 2 with Mr. Bentley choosing the other finalist.  … END_OF_DOCUMENT_TOKEN_TO_BE_REPLACED