You are here: Home / Archives for Starseed 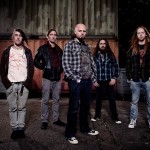 UK based hard rock band Starseed is quickly garnering a buzz across the pond here in the US.  I have been reading about them, but they caught my attention again when a couple of their singles were featured on the competition reality TV series "The Challenge: Battle of the Exes" on MTV.  Specifically, "Stand Beside Me (Everyday)" was featured on episode 7 "The Wedding … END_OF_DOCUMENT_TOKEN_TO_BE_REPLACED