You are here: Home / Archives for Sony Pictures Television 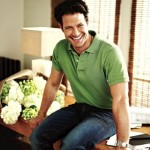 I'm so excited for "The Nate Berkus Show" to finally have an air date of September 13, 2010 on NBC owned and operated stations.  I was always a fan of Nate, but he particularly touched my heart when he bared his on "The Oprah Winfrey Show" after losing his partner in the December 26, 2004 tsunami.  He and photographer beau Fernando Bengoechea were vacationing in Sri Lanka at … END_OF_DOCUMENT_TOKEN_TO_BE_REPLACED