You are here: Home / Archives for Scotland 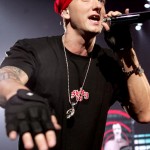 Eminem paid tribute to his murdered best friend Proof and appealed for the release of jailed pal Lil Wayne during his first European show in five years on Saturday, July 10, 2010. The "Stan" hitmaker took to the stage in Scotland for his headlining slot at the annual T In The Park Festival and thrilled fans with a 29-song segment. During the show he performed with his group … END_OF_DOCUMENT_TOKEN_TO_BE_REPLACED