You are here: Home / Archives for red carpet events 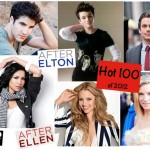 Now in its sixth year, Logo's AfterElton.com and AfterEllen.com websites have released the Hottest 100 Men and Women of 2012.  The list was based on reader votes and culminated in a first ever Hot 100 party on July 16, 2012 at the W Hotel in Hollywood.  Over 260,000 votes were cast this year for the hottest men and women in entertainment, athletics, politics and more.  … END_OF_DOCUMENT_TOKEN_TO_BE_REPLACED

The Reality Bash 2010 was held at Industry Nightclub (formerly Area) in West Hollywood on Tuesday, November 9, 2010.  It's the creation of Mark Long, Memphis Garrett, Pam Backer, and Kelley Jackson who wanted the spirit of the now defunct FOX Reality Channel's Really Awards to live on.  It was mostly a party scene with a few awards announced around midnight by Mark Long. I … END_OF_DOCUMENT_TOKEN_TO_BE_REPLACED

As a Gleek, I was overjoyed to interview Iqbal Theba who plays sometimes too fair Principal Higgins on Glee at the ITVFest Red Carpet Opening Gala last night in West Hollywood.  Check out my YouTube video below...and don't forget to rate it and susbscribe, too!  www.youtube.com/ifelicious. Read all of my blog posts about GLEE by CLICKING HERE. Read all of my blog … END_OF_DOCUMENT_TOKEN_TO_BE_REPLACED