You are here: Home / Archives for promo 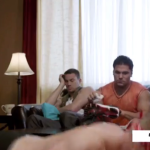 I just saw Ruthie Alcaide ("The Real World: Hawaii" and various Challenges) retweet this link, and I had to post it on my blog! MTV just released a part parody, part promotional video for the movie "White House Down"called "White House Down: MTV Safe House" (Twitter hashtag #WHDMTV). The MTV Safe House is "where they hide the cast members from the paparazzi and the drama from … END_OF_DOCUMENT_TOKEN_TO_BE_REPLACED