You are here: Home / Archives for Pregnant in Heels 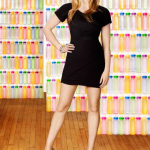 NEW YORK – March 1, 2011 – Bravo births the new series premiere of “Pregnant in Heels,” a docu-drama following Rosie Pope (Twitter: @RosiePope, Facebook: facebook.com/RosiePope) a maternity concierge to the most affluent, expecting mothers in New York City. Each week, Rosie guides two soon-to-be mothers through the joys and perils of preparing to have a baby. From a rock … END_OF_DOCUMENT_TOKEN_TO_BE_REPLACED