You are here: Home / Archives for phoenix arizona

(classic photo above, eh?) Chuck, Chuck, Chuck...for realz??  The story is more tame depending on the media outlet, but the real scoop is out there.  While in Scottsdale, Arizona during the early hours of New Years Eve (so I'm guessing he was free to party by the night of Dec 31), Charles Barkley was pulled over for running a stop sign.  He was arrested after he allegedly … END_OF_DOCUMENT_TOKEN_TO_BE_REPLACED 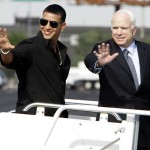 I had to clean out my ears and put my Tivo "pon de replay" a few times in order to ingest the news reporter on tv yesterday casually mention how John McCain and Daddy Yankee made an appearance together in Phoenix. Look, this blog is not about politics, but when pop culture anomalies transcend into politics, I just gotta say something.  How the hell did those two ever get … END_OF_DOCUMENT_TOKEN_TO_BE_REPLACED