You are here: Home / Archives for Orange County 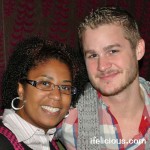 UPDATED Jan 18, 2011: My bad! I misread something from the interview and thought they were going to tape another season of The A-List in Orange County. Anyway, I've taken all the references to that out and tweaked the post a bit. ~Ifelicious Austin Armacost (twitter: austinarmacost) self described as "The realest bitch from 'The A-List: New York'" on Logo spoke to The … END_OF_DOCUMENT_TOKEN_TO_BE_REPLACED