You are here: Home / Archives for Nokia Theater 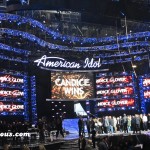 (POST UPDATED MAY 18, 2013 at 11:28pm ET.) I had the great fortune of attending FOX's 2013 "American Idol" Season 12 finale live show taping at the Nokia Theater in downtown LA. Great fortune continued in my favor as I was able to attend the official after party in a tent outside Nokia Theater as well as a private after party that had many more celebrity sightings at the W … END_OF_DOCUMENT_TOKEN_TO_BE_REPLACED