You are here: Home / Archives for mtv reality show

I love learning about the real people behind reality tv.  Nevan, I was liking your role as the snobby gay bff/cousin, but you're a little naughty one.  ;-) From The Smoking Gun... Meet James Nevan Donahue. If you're a fan of MTV's new faux reality show "The City," you'll recognize Donahue as the bothersome swell who pals around with an odious New York City woman named … END_OF_DOCUMENT_TOKEN_TO_BE_REPLACED 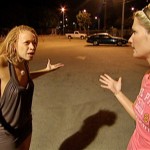 Guilty as charged. I watched The Real World again, and now it's on!!! You all need to start writing the producers. Did that ignant southern belle b** Kimberly just call Brianna ghetto? And all the aftermath...she completely did not get it. If you're white and reading this and thinking that there's no such thing as racism any more, let me just point my index finger at this … END_OF_DOCUMENT_TOKEN_TO_BE_REPLACED