You are here: Home / Archives for Mr. Rickey Calls a Meeting 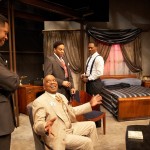 Saturday, January 14, 2012 was the press opening for Ed Schmidt's play "Mr. Rickey Calls a Meeting" ("Mr. Rickey") directed by J. Nicole Brooks.  As soon as you walk into the 2011 Tony Award winning Lookingglass Theatre's reception area, you are taken back to the year 1947 in which the play is set.  There are ugly but honest reminders of our nation's segregated past along the … END_OF_DOCUMENT_TOKEN_TO_BE_REPLACED