You are here: Home / Archives for Latrice Royale 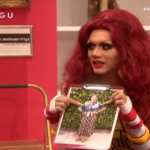 I know.  I know.  We've all talked about the programming changes at Logo, but one thing is for certain, "the house" that is RuPaul and her fabulous shows "RuPaul's Drag Race" and "RuPaul's Drag U" aren't going anywhere!  In fact, tonight season 3 of "RuPaul's Drag U" kicks off at 9 PM ET/PT on Logo.  "Knots Landing" actress Donna Mills is guest starring on the first episode and … END_OF_DOCUMENT_TOKEN_TO_BE_REPLACED