You are here: Home / Archives for LA Candy 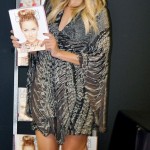 I gotta give props to Ryan Seacrest who got Lauren Conrad to prematurely announce her return to reality TV last month in an interview on his show.  I recall hearing from a source affiliated with Lauren about how her camp was flipping out that she, in so many words, confirmed her comeback to MTV with a new show focused more on her career. Watch the "On Air with Ryan Seacrest" … END_OF_DOCUMENT_TOKEN_TO_BE_REPLACED