You are here: Home / Archives for Keyshia Cole 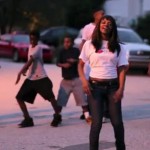 Man down code 10... Hold on, catch a breath... Do the old folks... In a hover round At Kroeger At Payless Shout out to Michelle Obama as well Just taste those dope lyrics...no pun intended.   ;-)   If you recall in my September 30, 2011 post "Frankie Lons mother of Keyshia Cole releases single with a dance called 'The Frankie Leg'," Atlanta based Frankie Lons … END_OF_DOCUMENT_TOKEN_TO_BE_REPLACED

We got to know Frankie Lons when watching the BET reality show "Keyshia Cole: The Way it Is," then on the spin-off reality series "Frankie and Neffe," and then battling sobriety on season 4 of VH1's "Celebrity Rehab with Dr. Drew."  Since that time, there have been reports of her being arrested, dating known drug abuser Slick 'Em from Pretty Ricky, and having had her own drug … END_OF_DOCUMENT_TOKEN_TO_BE_REPLACED