You are here: Home / Archives for Kevin McHale (Artie Abrams) 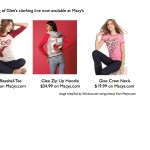 It's back to school time, and what better time to launch Glee's new clothing line exclusively at Macy's stores and on Macys.com.  The clothing can be found in the junior girls section and has a price point ranging from $19.99 to $34.99.  I've posted a few of the looks in the image above, but I also read that the line includes a Cheerios uniform- although I did not find it … END_OF_DOCUMENT_TOKEN_TO_BE_REPLACED