You are here: Home / Archives for Iron City 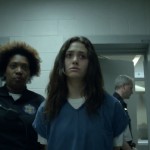 Episode 6 "Iron City" is my favorite episode of this season's "Shameless" so far. Fiona has to cope with her arrest; and Frank learns that he is living his last few days on earth. "Shameless" can't go on without Frank in it; and I don't want to think the show is in its last season, either (update Feb 18 @ 4:26pm CT: "Shameless" was just renewed for a 5th season!!!). On top of … END_OF_DOCUMENT_TOKEN_TO_BE_REPLACED