You are here: Home / Archives for Estelle 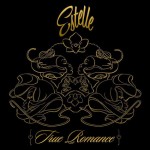 Estelle fans will not have to wait much longer for new music. Her fourth studio album entitled 'True Romance' is set to drop on February 17; although, with a title like that, it would've been nice to have it in time for Valentine's Day. Nevertheless, Estelle whet our appetites for her upcoming album by releasing a preview sampler of "True Romance" on SoundCloud. Take a listen … END_OF_DOCUMENT_TOKEN_TO_BE_REPLACED