You are here: Home / Archives for Eric “EZ” Zuley 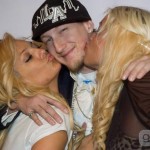 This commerical is hilarious!!! We want EZ!!!  LOL Yep, that is Hollywood's WTV (What U Need TV) host Eric "EZ" Zuley mackin' it out in a limo for Axe Body Spray's Music Star fragrance.  EZ has Hollywood on lock having interviewed dozens upon dozens of the greatest talent in the entertainment industry for WTV.  The first clip below shows EZ chattin' it up with the likes … END_OF_DOCUMENT_TOKEN_TO_BE_REPLACED

Tamala Jones first appeared on screen in the 1995 film "How To Make An American Quilt" as the great-granddaughter of Maya Angelou's character.  From there her career took off with various roles on television and in film.  I remember her best as the character Nikki from the movie "Booty Call." Well tonight, Tamala Jones along with the talented Gith PR hosted Vanessa J. … END_OF_DOCUMENT_TOKEN_TO_BE_REPLACED