You are here: Home / Archives for Emotional 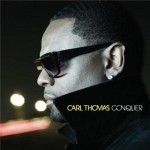 I haven't checked out Carl Thomas much since his "Emotional" album released back in 2000. "I Wish" topped the R&B charts and even crossed over to the pop charts. The title track "Emotional" also did well but not as successful as "I Wish." Now, he's onto his fourth album "Conquer" that I'll be checking out to see if he's still got that R&B flow that his early fans loved … END_OF_DOCUMENT_TOKEN_TO_BE_REPLACED