You are here: Home / Archives for Emilio Masella 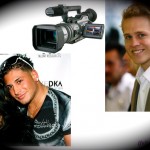 Just when reality TV couldn't get any weirder, Spencer Pratt apparently has his own production company called Pratt Productions (who knew?) and has partnered up with Snooki's ex, Emilio Masella, who will be "Fist Pumping for Love."  Yes, you read that as I right as I read it in the People article.  Filming is already underway. Says Emilio, "I am tired of these fake Italian … END_OF_DOCUMENT_TOKEN_TO_BE_REPLACED