You are here: Home / Archives for Easter Bunny 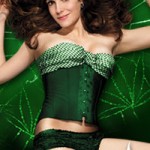 Here's the latest on the Showtime series, "Weeds."  The most shocking news is the recent announcement that Elizabeth Perkins who plays "Celia Hodes" will not be returning for upcoming season 6.  For now, her plans involve developing her own comedy series and also playing the role of a mother on an animated/live character film "I Hop" which "Revolves around an out-of-work … END_OF_DOCUMENT_TOKEN_TO_BE_REPLACED