You are here: Home / Archives for Dylan 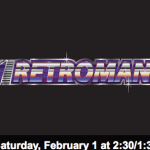 Earlier this week, I was watching  episode 3 of "The Real World: Ex-plosion"on MTV from my DVR. After the show ended, a segment aired where celebrities were challenged to name all of the members of the Wu-Tang Clan. My DVR cut off before the end of it, and I was pissed! Turns out that it was one of many preview clips airing this week as part of MTV's "Retromania: Hip Hop Week." … END_OF_DOCUMENT_TOKEN_TO_BE_REPLACED