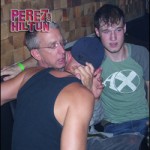 When I wrote my last post about the show "Oh! No she didn't...Kimberly crossed the line on Real World Hollywood ep2", I had no clue that I was stereotyping Brianna accurately as I joked how she should run with Kimberly's prejudices. I knew Brianna got pregnant and presumably had an abortion at age 19, but I wasn't expecting her addiction to meth and cocaine to surface this … END_OF_DOCUMENT_TOKEN_TO_BE_REPLACED