You are here: Home / Archives for DJ Fly Guy 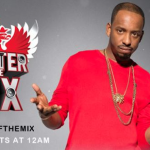 VH1 hasn't totally given up its roots in favor of shows like "Basketball Wives" and "Hollywood Exes." It's also harboring a sleeper hit worthy of a better than blurry-eyed time slot of Monday nights at midnight. I'm talking about the reality competition series "Smirnoff's Master of the Mix." Scooped up from Viacom sibling networks BET and Centric who aired the first couple of … END_OF_DOCUMENT_TOKEN_TO_BE_REPLACED