You are here: Home / Archives for Cory Monteith (Finn Hudson) 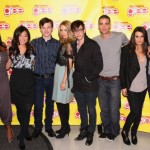 I haven't blogged about "Glee" yet, but I absolutely love that show.  While life has landed me in Ohio, also known as the gateway to the midwest, I am tickled that Ohio seems to be referenced  over and over as "Average America."  Or, maybe it's because Ohio and the rest of the midwest is brimming with talent that traces their roots to the midwest. :roll:  Actually, that is the … END_OF_DOCUMENT_TOKEN_TO_BE_REPLACED