You are here: Home / Archives for Chase A. Hutchinson 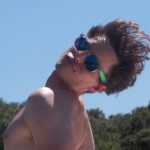 In the first two episodes of Logo TV's "The A-List: Dallas" we've seen Dallas native and real estate finance mogul Chase Hutchinson (Facebook, Twitter, blog) fuss over his hair and host his annual party that had a "Footloose" style flash mob led by Ashley Kelly, James Doyle drunk and bartending, Phillip Willis punching James then exclaiming with the best line of the season so … END_OF_DOCUMENT_TOKEN_TO_BE_REPLACED

I know producers of "The A-List" series that airs on Logo compare it to their successful "Real Housewives of Atlanta" series on Bravo, but I never thought that translation fit very as these aren't a bunch of rich house husbands, rather mostly single gay male socialites...and a girl living it up in the city.  I think the series has become something closer to MTV's "The Real … END_OF_DOCUMENT_TOKEN_TO_BE_REPLACED