You are here: Home / Archives for Charity Shea 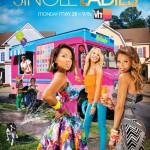 I'm feeling lukewarm about this, but I'm going to be watching season 2 of VH1's "Single Ladies" anyway. The acting left more to be desired, but the concept addressed a void in what's left of pop culture's scripted series.  On May 28, 2012, VH1 will be bringing back "Single Ladies" for a second season.  As I announced in a previous blog post, Stacey Dash who plays Val on the … END_OF_DOCUMENT_TOKEN_TO_BE_REPLACED

Twitter IDs for main cast: Stacey Dash- @REALStaceyDash Charity Shea- @CharityShea LisaRaye McCoy- @TheRealLRaye Gasp! Shock! Awe! VH1 has a brand new series coming out and it's NOT a reality show!  Do you need me to say that again??   ;-)   Like Beyoncé's anthem, VH1 will be launching a new scripted series called "Single Ladies."  On Monday, May 30, 2011 at 9:00 PM … END_OF_DOCUMENT_TOKEN_TO_BE_REPLACED