You are here: Home / Archives for Chad Michaels 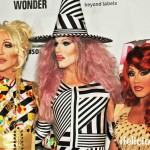 Season 4 of "RuPaul's Drag Race" has officially come to a close, but I'm giving you one last look at the cast that we've come to love, criticize, opinionate (i know that's not a word, lol), and hate on Monday nights on Logo.  In celebration of "RuPaul's Drag Race: REUNITED" and the official crowning of Sharon Needles, Logo invited select members of the press out to NYC at XL … END_OF_DOCUMENT_TOKEN_TO_BE_REPLACED