You are here: Home / Archives for cassandra cruz

After learning (thanks CutSleeveBoy) that Maurice Jamal had a new tv series that was a spinoff from his movie "The Ski Trip," I was all about getting hip to the movie to see if the series (tv series... The Ski Trip 2:  Friends and Lovers) would be worth watching.  It was already on my netflix list, but I moved it up to the top of the queue last week so I could watch it. I … END_OF_DOCUMENT_TOKEN_TO_BE_REPLACED 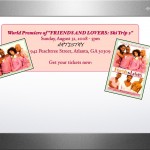 Thanks, CutSleeveBoy, for getting me hip to this... A while back I had a post called My Netflix Pick "Dirty Laundry" Was A Buried Treasure about a movie produced by the multi-talented Maurice Jamal. Well, he's back with a new tv series that's a spinoff of his first flick "Ski Trip".  I'm still trippin' that "lip chap" VH-1's Charm School winner Saaphyri is in it.  I've been … END_OF_DOCUMENT_TOKEN_TO_BE_REPLACED