You are here: Home / Archives for boy bands 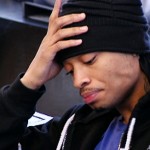 My, my, my!  Those of us watching MTV's Making The Band 4 (Season 3) have been forced to accept the conclusion that Danity Kane as we knew it is over, and beginning to believe in what Diddy's been calling the "Making The Band" curse as we've watched the guys from Day 26 unravel from stresses of contract negotiations, recording their sophomore album, and maturing as a group.  … END_OF_DOCUMENT_TOKEN_TO_BE_REPLACED