You are here: Home / Archives for Anthony L&S Footwear 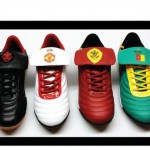 NEW YORK, May 4, 2010 (PRNewswire) -- Marley & Co. announced today that Anthony L&S Footwear has been awarded an exclusive worldwide licensing partnership for Marley Footwear. Paul Cohen, Chief Operating Officer of Marley & Co. made the announcement. "Anthony L&S is a leader in the footwear industry. The executives and designers have a great understanding of the … END_OF_DOCUMENT_TOKEN_TO_BE_REPLACED