You are here: Home / Archives for American Idol Season 8 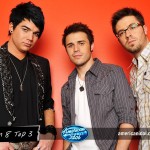 Forget about Paula Abdul and her new single "I'm Just Here For The Music" (ya, right) or denial about prescription painkillers addiction for a moment and let's focus on the real talent.  It's not the bottom 3, it's the final 3.  Danny Gokey, Adam Lambert, and Kris Allen round out this season of American Idol's top 3. Which 2 are going to the finale? Are you happy with this … END_OF_DOCUMENT_TOKEN_TO_BE_REPLACED

If you don't know me personally or follow me on twitter, I'm in LA this week (hence the lack of posts).  My flight from Phoenix to LA on Sunday had several mentionables on it, including American Idol's Michael Sarver.  He grabbed his girl's arm at baggage claim and swooped out ignoring the few that recognized him.  He's got that star thing down already!  ;-) Anyhooz, I'm … END_OF_DOCUMENT_TOKEN_TO_BE_REPLACED

Finally nabbed Joanna Pacitti on something that would stick. Star is reporting that Ms. Pacitti is pals with Michelle Young and Roger Widynowski who are both execs for American Idol. Remember my post about American Idol Season 8? Of course you do! ...but in case you don't, here's a linkey poo back to it:   http://ifelicious.com/?p=1629.  Besides the fact that I … END_OF_DOCUMENT_TOKEN_TO_BE_REPLACED