You are here: Home / Archives for 27 Club 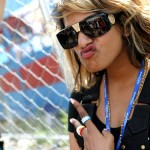 I just read about M.I.A. releasing a track called "27" in honor of Amy Winehouse's passing yesterday on billboard.com. "Hours after the death of Amy Winehouse was announced, M.I.A. posted "27," a demo dedicated to the 27-year-old deceased singer, on her Twitter page. The song was originally going to be included on M.I.A.'s 'Vicki Leekx" mixtape, but finds new resonance in the … END_OF_DOCUMENT_TOKEN_TO_BE_REPLACED