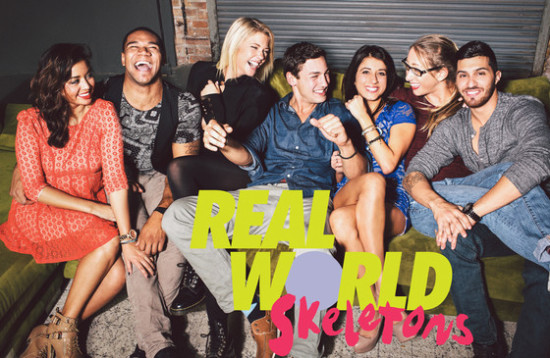 It just didn’t work. As a ridiculously loyal fan of MTV’s “The Real World,” I have to admit that this season was really bad. “The Real World” has been on the decline for seasons, but this was absolutely the worst. This was season 30 entitled “Real World: Skeletons,” and it was kind of a spin from their attempt to freshen things up last season where they surprised the cast, part-way into filming, with new roommates that were their exes a la “Real World: Ex-Plosion.” “Real World: Skeletons” wrapped up this week, and here are five reasons why I think it’s the worst ever:

1.) Even though the season was called “Real World: Skeletons,” the guests weren’t truly skeletons. Nicole from Staten Island is my favorite cast member this season, and is one of triplets. Her “skeleton” was the arrival of her two other triplet sisters. If the entire season was more like the last episode when they brought in Jason’s biological father whom he never met, then it would be winning with me. My goodness! I cleared an entire box of tissues watching that play out.

2.) While they toss in what looks like a legal department mandated PSA when there’s fighting in the house, it is no longer grounds for being kicked off the cast. I liked that this show set some boundaries in yesteryear. Even though ratchet reality TV is full of on-camera brawls these days, I thought “The Real World” was above that in a good way. Instead, there was this band-aid moment, after Jason grabbed Nicole, that preceded the PSA where the house spends time in a group session with a therapy. Bruno and Nicole opted to blow it off. Not to mention that fight earlier in the season with Madison and Sylvia. I just sigh and carry on…

3.) Madison. If you watched this season, I don’t to say more than that. Ok, I will at the risk of people reading this one sentence and attacking me for having an opinion… I was so waiting for her to drop the barbie doll exterior and her voice a few octaves and level with us. I’ll stop there.

4.) Bruno just checked out of the season once he found a girlfriend, and Violetta wasn’t good TV. I literally just yawned as I typed that sentence… I get that Bruno’s girlfriend Carla wasn’t a fan of the cameras, but she was dating someone on “The Real World.” I’m going to wager a guess that they’re no longer together which makes me wonder if Bruno regrets not interacting more with the cast. As for Violetta, the only thing I remember is how my inner ear was ringing in a bad way when she got pissed off and kept saying “byeee.”

5.) I miss when the cast had some common goal whether a job or service work, and it was a condition of being on the show. That sounds like I’m channeling my inner nerdy, peace loving Ifelicious, but hear me out. Even season 12 “The Real World: Las Vegas” (first time it was filmed in Vegas) which my hubby deems the last really good season, the cast had jobs as club promoters. The season before that was “The Real World: Chicago” (for the first time) and cast members were sent to work with the Chicago Park District.

MTV and Bunim-Murray it’s been a great run, but I think it’s time to retire one of the original reality TV series “The Real World.” I’m sure you could do an entire farewell season with nothing but highlights from the past 30 seasons. I should totally pitch that to them. 😉 Feel proud; 30 seasons is a heck of an accomplishment. I’ve been reading rumors that the show may not return especially since there’s reunion episode (how is that even possible?), and “The Real World” wasn’t included in the press release announcing “The Challenge” has been renewed.

Reality Blurred published a really good interview with “The Real World” creator Jonathan Murray back in January. To read it, CLICK HERE.