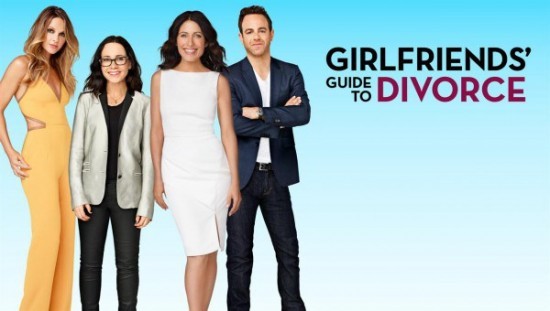 Shut the front door! I managed to get my hubby to watch a show on Bravo, and he actually liked it! Over the Christmas holiday, I blessed him with a few episodes of “Girlfriends’ Guide to Divorce;” and he responded with, “They need to move this show to HBO or Showtime.” That’s a compliment and hubby-speak for the show belongs on a network more known for award winning scripted series, less censored… and where he could still keep his dignity. 😉 Truth be told, Bravo hit a home run with “Girlfriends’ Guide to Divorce”- the first scripted series to see the light of day on the network. Mirroring the trendy, tight-knit chick clique format that made HBO’s “Sex and the City” popular, the writers and producers turned a storyline about wealthy divorcées in their 40s with kids into something appealing to Bravo’s audience that is typified by the “Real Housewives” franchise.

The show, as described in a press release:

“Girlfriends’ Guide to Divorce,” inspired by the “Girlfriends’ Guide” book series by Vicki Iovine, follows Abby [Lisa Edelstein, “House”] who shocks the world when she reveals that her seemingly perfect life has all been a lie. After publicly admitting that she has separated from her husband, Jake (Paul Adelstein, “Private Practice”), America’s once-favorite girlfriend finds her career and marriage in a free fall. As she starts to navigate life as a single woman in her 40s, Abby turns to her new divorced friends, rather than her married ones, for advice. Her friend Lyla (Janeane Garofalo, “Reality Bites”) is a legendary no-nonsense entertainment lawyer who is in a constant ‘War of the Roses’ battle with her ex-husband, and Phoebe (Beau Garrett, “Criminal Minds: Suspect Behavior”) is a former model and budding entrepreneur who has a very unique relationship with her ex. Meanwhile, a rival attorney at Lyla’s firm, Delia (Necar Zadegan, “Emily Owens, MD”), is hired as Abby’s divorce attorney, and begins to cause a rift between the girlfriends. Marti Noxon (“Buffy the Vampire Slayer”), Vicki Iovine, Meryl Poster, Liz Kruger, Robbie Duncan McNeil and Craig Shapiro serve as executive producers.

I’m sad to read that Janeane Garofalo’s character Lyla exits the storyline after 6 episodes, roughly halfway through the 13-episode season, as she was clearly poised as one of the main characters. You’ll have to comment if you know what led to her exit. I love the grown up “Daria” edge that she brings to the cast along with her eclectic blend of drive, sarcasm, and vulnerability.