Pocket Protein Kidz is the latest healthy protein product developed by reality star, fitness enthusiast, and entrepreneur Mark Long in partnership with LA Clippers’ Head Coach Doc Rivers. The two are utilizing a Tilt crowdfunding campaign to raise the money needed to get Pocket Protein Kidz off the ground and into your children’s backpacks. Similar to its predecessor Pocket Protein that launched last year and is currently in over 1000 retail stores nationwide, Pocket Protein Kidz is a tasty, low sugar, low carbohydrate and non-perishable snack that both packs easily and balances children’s nutritional needs. “We suggest pairing Pocket Protein Kidz with any healthy carb snack whether it’s a whole wheat bagel in the morning as they walk out the door…or a banana after school with Pocket Protein Kidz before cheerleading or football or baseball,” explained Mark. Additionally, Pocket Protein Kidz is gluten free, lactose free, and GMO free making it great alternative for children with food allergies.

Another reason Mark and Doc teamed up to launch Pocket Protein Kidz is to help combat childhood obesity and address the particular added complexities of access to nutritious food options in low income households. Mark points out:

“Childhood obesity is an epidemic across the country…A lot of programs for low income families will send backpacks full of food over the weekend for the kids, but they’re sending things like powdered mac ’n’ cheese…and creating bad eating habits by trying to solve another problem of getting kids nutrition over the weekend. The food the programs send can’t require refrigeration and needs to be filling. That creates a vicious cycle of getting children addicted to starchy carbs and processed foods while trying to keep them from being hungry all weekend.” 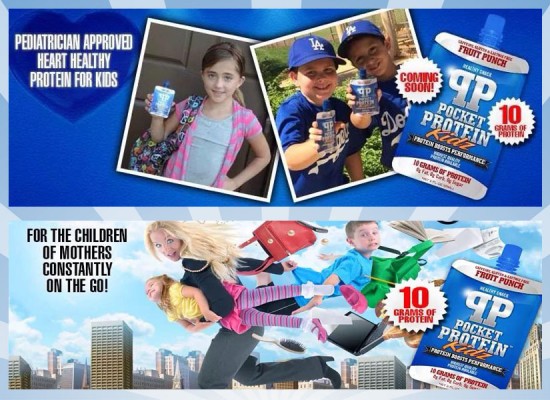 To make a pledge, visit Pocket Protein Kidz on Tilt.