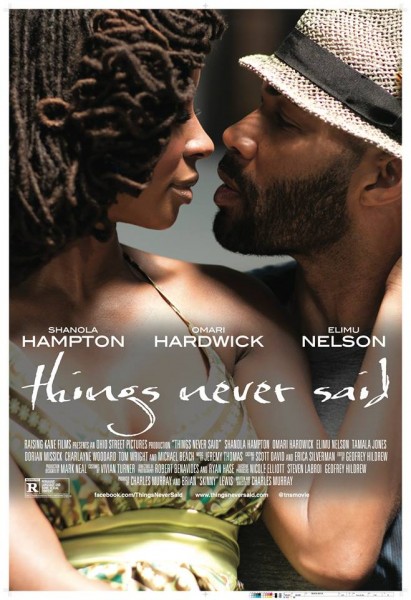 Showtime “Shameless” fan of Shanola Hampton (plays “Veronica Fisher” aka “Vee”)? Check! Spoken word/slam poetry fan? Check! That’s all the convincing I needed to check out a screening of “Things Never Said” during the 2014 Milwaukee Film Festival. The film features character Kalindra Stepney (Shanola Hampton) who has turned to spoken word poetry as an emotional outlet for the turmoil in her life. Her dream is to hone her new craft and travel from her home in California out to the infamous Nuyorican Poets Cafe in New York City to perform at the epicenter of spoken word and slam poetry. When the opportunity to get her foot in the door as a waitress at Nuyorican gets presented to her, it is quickly sideline and her husband, Ronnie (Elimu Nelson), is mainly the reason. With resentment and despair growing, in enters broken but understanding…and hot…Curtis Jackson (Omari Hardwick) who becomes Kalindra’s confidante, advocate, and love interest. The rest is a journey of self discovery as Kalindra faces her demons regarding patterns of domestic violence, infidelity, and the pain of loss of a child before she can come out on the other side a stronger woman and poet. The film at its core is well intended but “Shameless” actress Shanola Hampton talent only flickers in “Things Never Said.”

If you take other films that use poetry and love as a backdrop to the storyline like “Slam,” “8 Mile,” and “Love Jones,” the “Things Never Said” pales in comparison. The storyline is a bit too predictable; and even though Kalindra was introduced as a mediocre poet, her poetry and that of her cohorts was absolutely unbearable through most of the film. If, however, you wait until the final 30 minutes, you’ll get the poetry contact high that you longed for throughout the entire film. I also have to give “Things Never Said” credit for addressing multigenerational domestic violence without pulling any punches, pun intended. There were some choice lines surrounding that subtext that brought me to tears, particularly from Kalindra’s father Daniel (Tom Wright). On a lighter note, the cast is packed with African-American eye candy which pacifies you through the slower parts of the film.

“Things Never Said” was written and directed by Charles Murray and selected for the 2014 Milwaukee Film Festival’s new Black Lens series.  The festival continues through October 9. For remaining films and showtimes, visit mkefilm.org, and search/share your experiences using the hashtag #MFF2014 on social media.