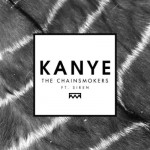 EDM DJ duo Andrew Taggart and Alex Pall of The Chainsmokers did a spot on mirroring of 20-something pop culture with their hit dance track "#SELFIE," and now they're back with a new single "Kanye" featuring indie band out of LA named Siren. The song turns Kanye into an adjective basically translating to being anything you want to be. I wonder if that term will stick in pop … END_OF_DOCUMENT_TOKEN_TO_BE_REPLACED