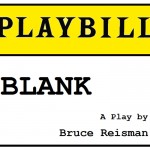 So much of Hollywood being focused on film and TV that its vibrant theater scene does not get well deserved attention. Theater is Hollywood's hidden gem which should be no surprise considering that it is bustling with actors, writers, producers, authors, and directors. Not to be missed is the stage play "Blank," written and directed by Bruce Reisman, at The Complex Hollywood's … END_OF_DOCUMENT_TOKEN_TO_BE_REPLACED