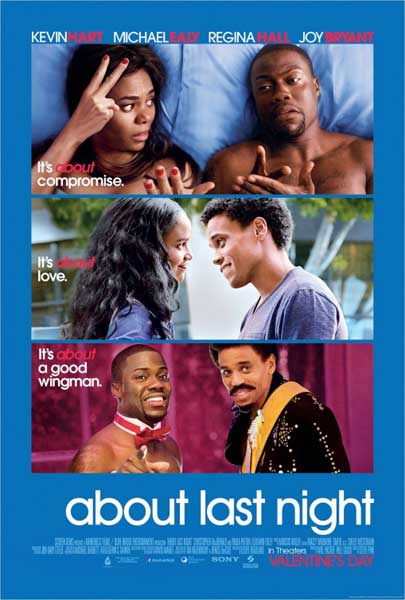 Joan and Bernie seem to bring the heat in feuds and in the bedroom. Debbie and Danny, on the other hand, are the sweet couple that stumble into romantic bliss with puppies and flowers. However, nothing is always as it seems. In addition to the central storyline, there’s also an underlying theme about finding happiness and following your passion. Musically, I recognized two of my favorite artists Bruno Mars and John Legend on the soundtrack.

Predictability aside, “About Last Night” is amusing if you take the film for what it is. Plan a girls night out or date night with your boo, and go see “About Last Night” when it opens in theaters on…*in my GEICO hump day camel voice* “Guess what day it is?”…Valentine’s Day 2014.

As for Kevin Hart, I don’t hate him, but I do think he’s a one trick pony. I love comedy. I’m a bit of a fanatic about comedy. Kevin Hart makes me laugh, but I don’t get belly laughs that leave my stomach feeling like I just did a thousand sit ups. But, if you love the Kevin Hart role he seems to play well in movies then you’ll surely enjoy “About Last Night.”

Closing on a sidenote, I’m loving the “nineties-esque” resurgence of movies featuring an all black cast. While I love me some Tyler Perry and applaud his success, I feel he’s dominated the voice of black relationships in movies the past few years. It was nice to watch a black love story without Madea, “hellurr,” and a gospel/preachy moment about “kids these days.”

If you’re not hip to Gofobo, you need to get on board! It’s the way that I got to preview “About Last Night” and many other films before they officially release in theaters for free. Check out gofobo.com to sign up and start seeing flicks early!

Copy of My Review on Gofobo

Review: I don’t readily remember the original 80s version of “About Last Night” so I can’t compare the two, but I thought this version was good albeit a predictable storyline. Kevin Hart is at the top of his game now, but he does tend to play the same type role from film to film. Nevertheless, his character along with Regina Hall’s provide the levity needed to keep you from getting distracted or bored. Would recommend this film for a girls night out or date night.