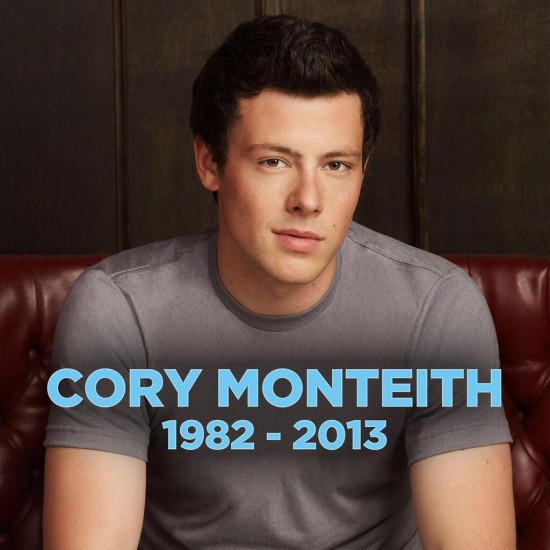 I have no words… I woke up randomly tonight and stumbled on the breaking news that Cory Monteith, who plays Finn Hudson- a recent high school graduate from McKinley High Finn on the hit FOX series “Glee,” is dead at age 31. He was found dead on Saturday, July 13, 2013 in his hotel room in Vancouver after not checking out as expected. Knowing he went public about his substance abuse problems, even checking into rehab back in March 2013, I’m wondering if his untimely passing was drug related. Although a few news outlets are citing that, we’ll have to wait for more official announcements. For now, I’ve read that they ruled out foul play. Monteith’s “Glee” character Finn had been dating fellow lead character Rachel Berry (Lea Michele). The two were also dating in real life.

UPDATE JULY 16, 2013: I just read several reports indicating that Cory Monteith’s autopsy revealed he had a toxic combination of heroine and alcohol in his system. Read this article posted on E! Online for more — CLICK HERE.

When I asked Damian McGinty from “Glee” and “The Glee Project” at the 2012 NewNowNext Awards who he was most excited to meet when he joined the cast of “Glee,” he replied:

I wanted to meet Cory Monteith. I think he’s a great actor. He’s someone I kind of aspire…to be as good as. He’s such a nice guy. He’s a big gentle giant, and he always gives me advice. The storyline we have on the show is very much true to life, so that’s awesome.

This comes on the heels of the announcement of “Glee” cast changes for season 5, most notable is the addition of Adam Lambert. From a show perspective, I wonder how creator Ryan Murphy will handle the Finn Hudson character since there were no intentions to remove him from season 5’s storyline. More importantly, I know his family, Glee cast mates, and Gleeks like myself everywhere are nothing less than melancholy at the loss of Monteith. I’m glad I can say that I saw him perform live during the 2011 Glee Live! Tour.

I found and watched this video that “officialswiftiegleek” put together of “Top 20 Finn Songs from ‘Glee’ Seasons 1-4” on YouTube. Check it out below:

We are deeply saddened by this tragic news. Cory was an exceptional talent and an even more exceptional person. He was a true joy to work with and we will all miss him tremendously. Our thoughts and prayers are with his family and loved ones.

This article in Billboard is a really good read – Cory Monteith: Thoughts on losing ‘Glee’s heartbeat.

Gleeks, what are your favorite Finn moments?

Read all of my blog posts about “Glee” — CLICK HERE.

UPDATE OCT 17, 2013: I just ran across this article on ‘Elle’ which resembles something I would write about Cory Monteith if I could get myself to sit down and reflect in words on how Cory Monteith, his character Finn Hudson, and the show “Glee” personally affected me. Read “Warning: This Editor’s Response to the Cory Monteith ‘Glee’ Tribute Will Make You Cry.”