You are here: Home / ifelicious music / Eve is back on the music scene and ‘She Bad Bad’ 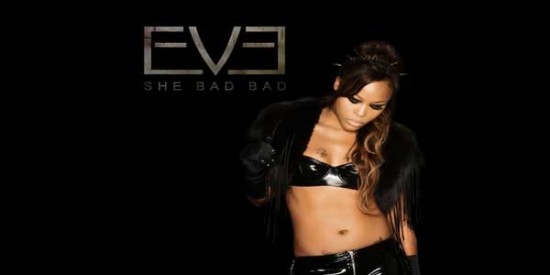 Ruff Ryders first lady, “Barbershop” actress, and star of a TV series bearing her name Eve is back and “she bad bad!”  The hot debut single, “She Bad Bad,” from her 4th album entitled “Lip Lock” due out May 14, 2013 is currently available for download from iTunes and Amazon.  It’s been 11 years since Eve released her own album, but from the nearly million-and-a-half YouTube views of her “She Bad Bad” video that dropped  a month ago, it looks like her fans old and new are ready and waiting.

Listen to “She Bad Bad”

I love the tribal vibe meets hard core hip hop femcee in this track. It’s already on my gym workout playlist. Eve still got it!

The remix was released at the end of January.  Check it out below.

** How does the remix stack up to the original? **

Check out the video for “She Bad Bad” by Eve

Eve plans to release the single “Make It Out This Town” next.

“It is a track about being in a dark place — or you could literally say being in the town that you’re in but you have bigger dreams or bigger hopes… just making it out of that situation and knowing that you can do whatever it is that you put your mind to. It’s a song that I’m dedicating to and using with my partnership with the Big Brothers Big Sisters of America.” (source: Billboard)

“Lip Lock” will be released under Eve’s own record label FTR (From the Ribs) Music and distributed through Sony/RED Music.

For more on Eve…