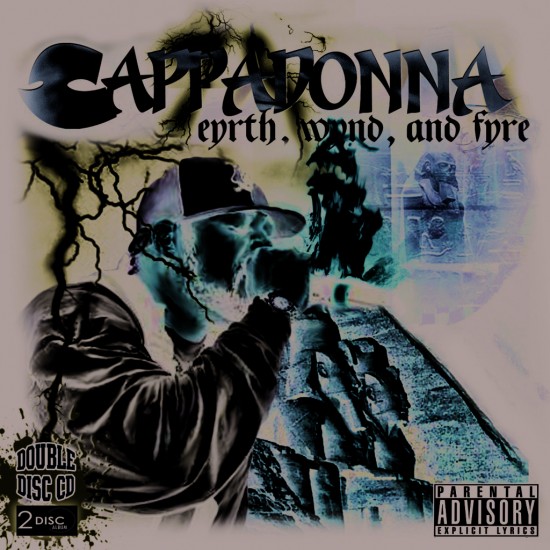 “In the Dungeon” by Cappadonna featuring Show Stopper

“Rap is like Crack” by Cappadonna featuring Solomon Childs

Cappadonna grew up with and attended grade school in Staten Island with the members who would eventually construct the seminal rap group Wu-Tang Clan. However, it wasn’t until 1995 that he made his recorded debut, appearing on Raekwon’s “Only Built 4 Cuban Linx LP;” and was soon thereafter anointed as the official tenth member of the group thanks to the serious darts he spit on the instant classic “Ice Cream.” In 1996, he played an integral role on Ghostface Killah’s “Ironman” LP. During 1997, his Wu affiliation not only continued, but flourished as he contributed on the Clan’s second LP, “Wu-Tang Forever” (which is now 6X platinum).

Though he continued to be a regular fixture on all Wu-Tang Clan related projects, Cappadonna’s solo debut, “The Pillage,” was released in 1998 and it was executive-produced by RZA and included cameos from Method Man, U-God, and Raekwon. “The Pillage” instantly impacted upon its release, and it debuted at number #3 on the charts and was quickly certified Gold.

Cappadonna was again predominantly featured on the Clan’s 2000 release, “The W,” and followed up with his sophomore solo-project project, “The Yin and the Yang,” which reaped similar commercial and critical success. Cappadonna’s third solo project, “The Struggle,” was released in 2003 and Cappa reaffirmed his status within the crew by contributing to the Clan’s fifth-studio LP “8 Diagrams” in 2007. Cappadonna inked a new solo-deal with Koch Records shortly thereafter in 2008 and would go on to release his fourth official solo-project “Slang Prostitution” with Koch in 2009 and “The Pilgramage” in 2011.

While the legendary MC has remained an active voice within the Wu-Tang collective, touring, contributing to classic Soundtrack (“High School High” and “Don’t Be A Menace“) cuts and as a member of Ghostface Killah’s Theodore Unit and the more recent commingling with his Wu-comrades on RZA’s “The Man With The Iron Fists OST” on the Wu-Tang Clan reunion track “Six Directions Of Boxing” and appearing on the Wu-Tang Clan & D-Block project Wu-Block. The “Papi Wardrope Kings” renaissance continues with his new double-disc solo-project, “Eyrth, Wynd & Fyre,” which will be released by RBC Records on February 12th, 2013.

“Eyrth, Wynd & Fyre represents the energy and elements of life. The changes that the earth generates, the turbulence of life; if the wynd is not in your favor, you cannot fly high. The Fyre is the truth, it just can’t be denied, the truth hurts, but it also builds character” states Cappadonna.

Cappadonna’s “Eryth, Wynd & Fyre” will feature production from Stu Bangas, J. Glaze and G-Force (among others) and feature guest appearances from Solomon Childs, Sav Killz and shows that Capp’s “PLO Flow” is just as sharp as ever as Cappadonna laments:

“I’m just trying to be the best I can be for my fans, I just want to be loved for my art, I want them to see my passion and as long as people are still feeling that and applauding, I’m going to keep milking that cow the best I know how. To be releasing this project with RBC Records (who has also released projects from Tech 9Nne, DJ, Quik, E-40, Too Short & more) is a blessing, its always good to be among the legends. We have all been in the game for many years; it feels good to be a part of that and to have a home.”