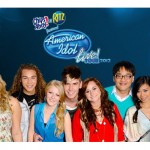 With all of the gossip surfacing daily speculating on who will or will not be on the judging panel for season 12 of "American Idol" (thank God it seems that's all settled now), it was nice to turn my attention to what "American Idol" is really about- showcasing previously unknown musical talent competing for their shot at stardom.  Such was the case on Tuesday, September 11, … END_OF_DOCUMENT_TOKEN_TO_BE_REPLACED